Print-Leeds has branched into self-adhesive label production after investing just over £1m in a new press, finishing kit and MIS and creating a new specialist division.

The business, which already supplies wet glue labels to the beverage and food industries and has operated a digital printing division since 2009, started work on the new business arm around a year ago, with managing director Rod Fisher working on putting together the finance and the right team to take the division to market.

After researching a number of options, including visits to Labelexpo and various manufacturers, the business decided to invest in a Screen LS350 SAI seven-colour press, which Print-Leeds said is the first to be installed in the UK.

It has also taken on a Digicon Series 3 from AB Graphic (ABG), a modular finishing system which is tailored to the company’s requirements and which allows embellishment of labels with tactile varnishes and other special effects.

The business, which completed the installation of the new, additional kit last month, has also implemented a new CERM MIS, as it looks to change the inner workings of the company.

The new division was launched around three weeks ago and Fisher said it is up and running and producing jobs on a daily basis. 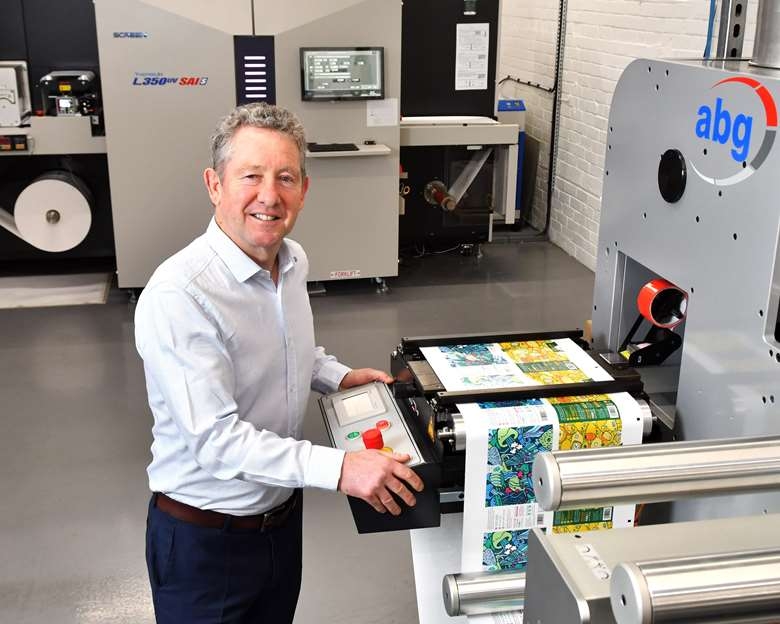 “Adding self-adhesive labels to our offering is the obvious progression for the company,” he said.

“It’s been a real lockdown challenge for me – organising the finance and recruiting the team and when Covid-19 hit I didn’t think I’d be able to achieve this – I thought my plans would be delayed.”

He told Printweek: “For the last 10 years we’ve been in labels, so we’re well used to producing printed labels, although those are wet glue, and to me this is just another division where we print onto different substrates. The technology is very straightforward for us.

“We’ve already been speaking to existing customers about the new division because they all buy self-adhesive labels, just not from us previously. We’re also speaking to new people, lots of people are interested.”

The company reorganised existing operations at its 2,973sqm site to make way for the new machinery, moving three guillotines and a paper storage area. It is in the process of building a bespoke air-conditioned, humidified room for the machinery which will be completed by the end of this month.

The new division has also created six new roles. Malcolm Bunn has joined the firm as sales director while Chris Whitehead and Jerry Dugdale have been taken on as sales executives. Sam Nightingale-Smith, who has joined as IT and estimating, is heading up the transition to the new CERM MIS. Two new technical staff have also been taken on to operate the equipment.

Print-Leeds now employs 32 staff, which Fisher said should increase to 40 by the end of this year. It had already taken on five other new recruits over the course of summer and autumn 2020.

The company’s turnover currently stands at around £4m and Fisher is hoping this will increase to £6m by the end of its next financial year.

The business, which started life as a repro house before moving into print in 2001 and into labels in 2013, completed an extensive £5m investment programme in 2017, which saw it move into its current factory and install a £2.5m Heidelberg Speedmaster XL 106 seven-colour plus coater.